Wayne County Civil War Roundtable Program Nov. 15, 2016, 6:30 p.m.  Another quality CWRT program in the Wooster Library which is free and the public is welcome. 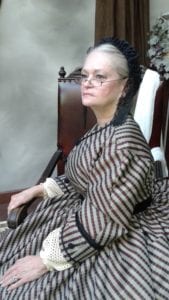 Lynne Bury from Marshallville, OH, current National Historian of the Ladies of the Grand Army of the Republic, will speak on the founding and history of that organization. Founded in 1881 they are the oldest women’s heritage society in the United States. Descendants of Union Civil War Soldiers, they’ve been in existence even longer than the Daughters of the American Revolution.
Lynne served as the order’s national president from 1986-1987 and from 2003-2005. She’s currently writing a history of the group. “When we began we helped Civil War soldiers. Today we’re still working to help soldiers.” It’s members also work to preserve Civil War history.  In 1927, there were over 80,000 members in the Ladies, located in just about every state of the union. Bury added, “We didn’t have too many Circles (local chapters) in the South.”
Her talk will cover all things past and present about these women who, after 134 years, still rally round the flag.
Lynne found herself “plunged” into mid 19th century life when she married Gordon, a long time CW reenactor.  That began a lifetime of research studying women’s clothing during that period.  In a few years she found herself winning gown competitions, lecturing, and writing articles for various Victorian publications.  She attended her first LGAR convention in 1975 and has become very involved in that organization.
She and Gordon reside in the beautiful 1883 octagonal house above Orrville where they give tours, teas, and workshops on Victorian crafts.