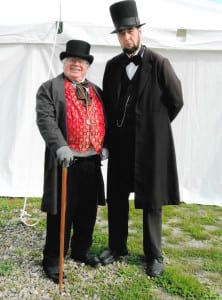 A re-enactment of the last of the historical debates between Abraham Lincoln and Stephen A. Douglas for the Senate Seat for the sovereign state of Illinois held on October 15, 1858 in Alton, Illinois.  There were a series of seven debates between Abraham Lincoln, the Republican candidate for the United States Senate from Illinois, and incumbent Senator Stephen Douglas, the Democratic Party candidate. The debates previewed the issues that Lincoln would face in the aftermath of his victory in the 1860 presidential election. Although Illinois, itself, was a free state, the main issue discussed in all seven debates was slavery in the United States, particularly the issue of slavery’s expansion into the territories. The format for each debate was: one candidate spoke for 60 minutes, then the other candidate spoke for 90 minutes, and then the first candidate was allowed a 30-minute “rejoinder.” The candidates alternated speaking first.  This debate will not go on for three hours!

The re-enactment will be presented by Ken Hutchinson of Canal Fulton and Gerald Payn of Wooster.

Stephen A. Douglas was reelected by the legislature, 54-46, even though Abraham Lincoln won the popular vote with a percentage of 50.6%, or by 3,402 votes.  However, the widespread media coverage of the debates greatly raised Lincoln’s national profile, making him a viable candidate for nomination as the Republican candidate in the upcoming 1860 presidential election. He would go on to secure both the nomination and the presidency, beating Douglas (as the Northern Democratic candidate), among others, in the process.