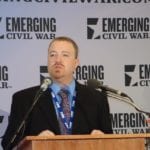 We are most pleased to have Dan Welch, co-author of “The Last Road North: A Guide to the Gettysburg Campaign, 1863” come to Wooster for our Sep. 19 WC CWRT program.  Welch will explore how the two armies “cat-and-moused” their way across Virginia, Maryland, and Pennsylvania in the weeks before the battle. Welch’s book, based on the Civil War Trails, and is packed with dozens of lesser-known sites related to the Gettysburg Campaign. His book offers the ultimate Civil War road trip.

Dan Welch currently serves as a primary and secondary educator with a public school district in northeast Ohio. Previously, Dan was the education programs coordinator for the Gettysburg Foundation, the non-profit partner of Gettysburg National Military Park, as well as a seasonal Park Ranger at Gettysburg National Military Park since 2009. During that time, he has led numerous programs on the campaign and battle for school groups, families, and visitors of all ages.

Welch received his B.A. in Instrumental Music Education from Youngstown State University where he studied under the famed French Hornist William Slocum. He earned his M.A. in military history with a Civil War Era concentration at American Military University. Welch has also studied under the tutelage of Dr. Allen C. Guelzo as part of the Gettysburg Semester at Gettysburg College. He currently resides with his wife, Sarah, in Boardman, Ohio